Techno-Z Technology Park is a very sucessful model for technology and innovation centres with 30 years of history. 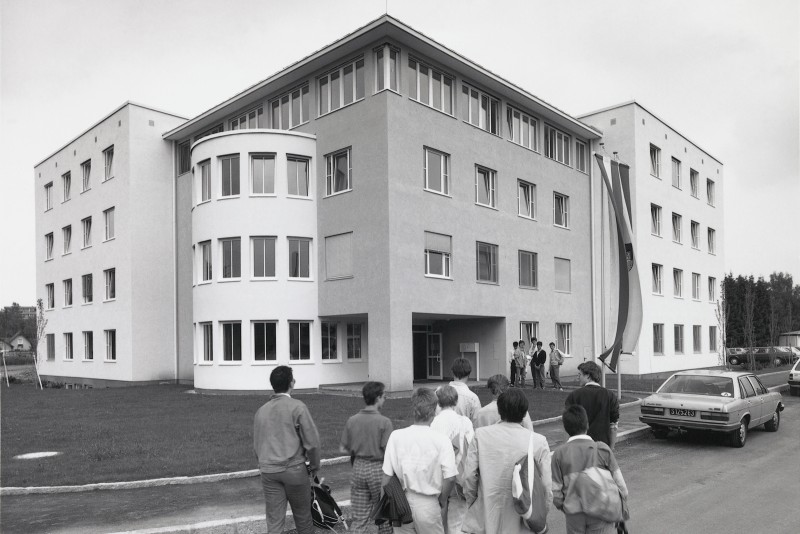 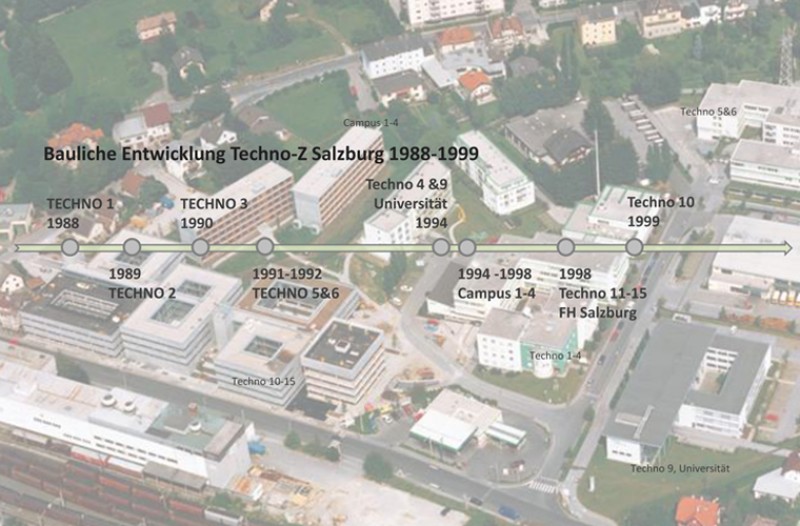 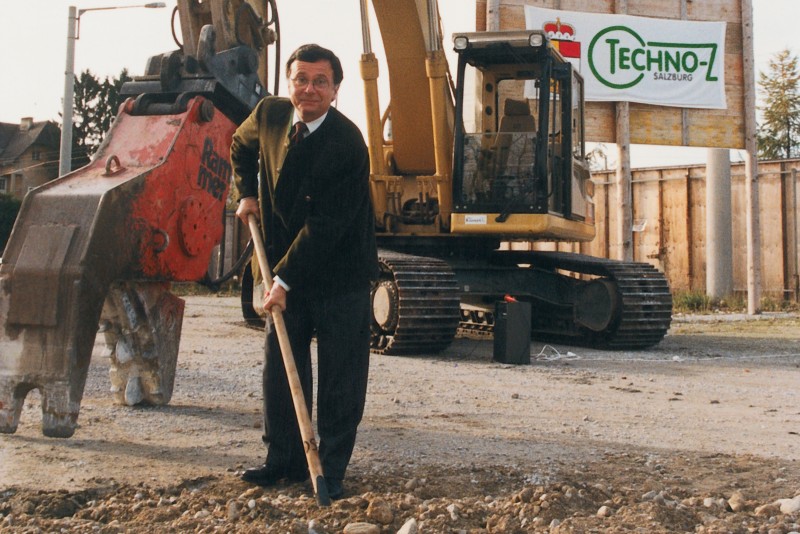 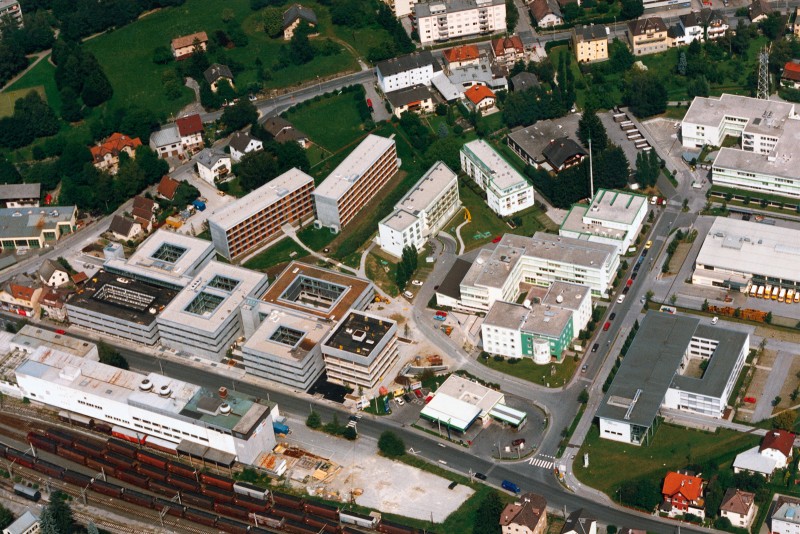 In 1978, Salzburger Betriebsaniedlungsgesellschaft is established in response to the general economic crisis. The company places particular emphasis on the establishment of high-tech companies. With concrete plans for a business incubator and technology center, Salzburg is one of the most innovative regions in Europe and creates the institutional and organizational basis for today’s Techno-Z Verbund.

In 1988, the first Techno-Z facility opens with building 1 in Salzburg Itzling. It is one of the first technology centers in Austria. Implementation of the Techno-Z concept is at the core of the technology initiative of Land Salzburg. Due to the dynamic development in the high-tech sector, the high demand of companies and the expansion of education and research facilities, a great deal of building activity takes place in Salzburg. A spacious campus is built here according to the “Working, studying & living” principle. At the same time, locations in the southern part of the country are being built and expanded.

Within a decade, Techno-Z Verbund GmbH has established itself as a holding company with far-reaching tasks. It is now responsible for seven locations and several fields of action. The tasks range from securing building land and commercial space to technology transfer, technology marketing, innovation consulting and promotion, as well as establishment of the Fachhochschule [University of Applied Science].

An important pillar of the Techno-Z concept was and is the connection of entrepreneurs and research institutions. In 1988/89, Techno-Z taught the first course called “Applied information technology and computer science” at Universität Salzburg [University of Salzburg]. At that time, Techno-Z was also the location of one of the first high-performance computers. Until the opening of the institute’s own computer science building (1994), the lectures took place in buildings 1-3.

Another important step in the direction of highly-qualified training was undertaken by Salzburg with the founding of the Techno_Z Fachhochschule in 1995. The first students enrolled in the new FH course “Telecommunications technology and systems” in the 1995/96 winter semester. In 1996/97, the second FH course “MultiMediaArt” was taught. The lack of space was put to an end with the move to the newly built Techno 11-15 building in 1998. 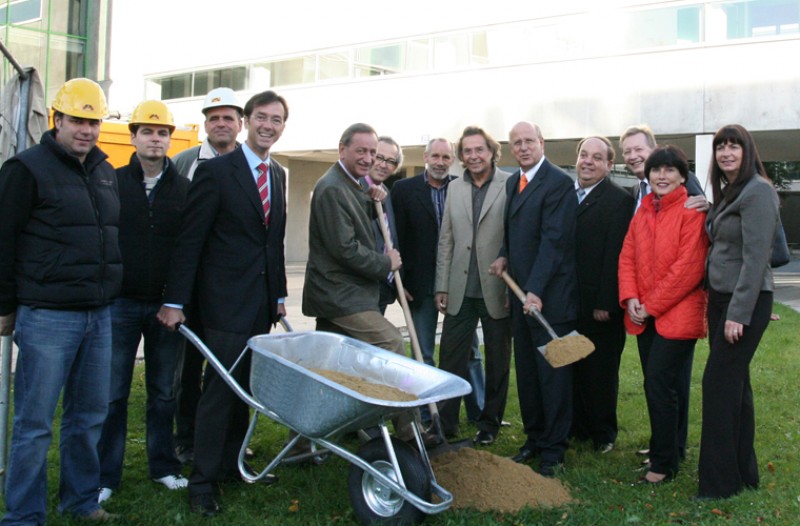 2006: restructuring Techno 12-15 in Techno-Z Salzburg for a new anchor tenant: the bfi Salzburg 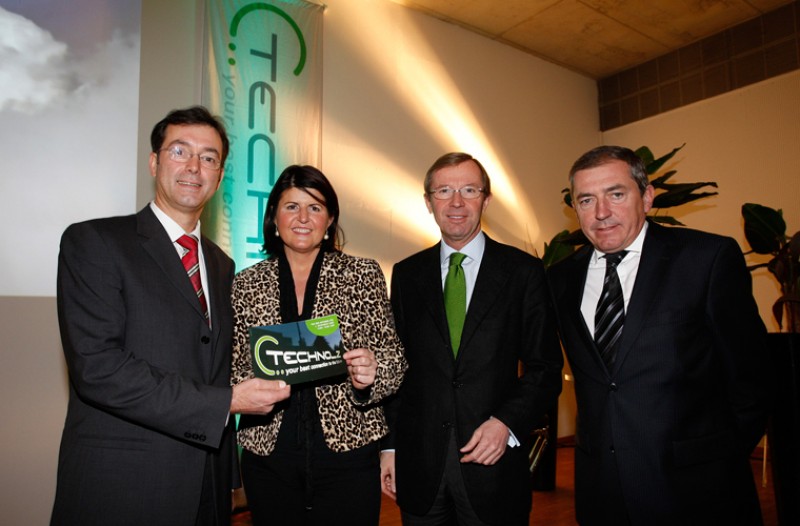 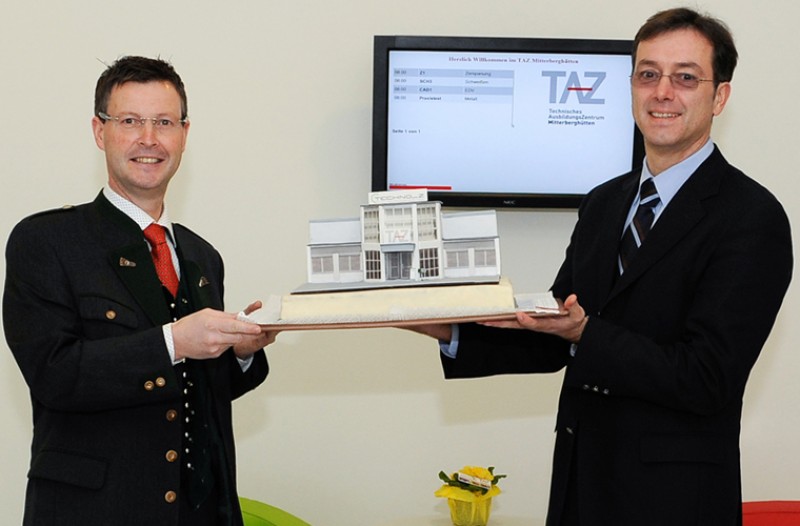 2010: opening of the TAZ, a technical educational institution in Bischofshofen 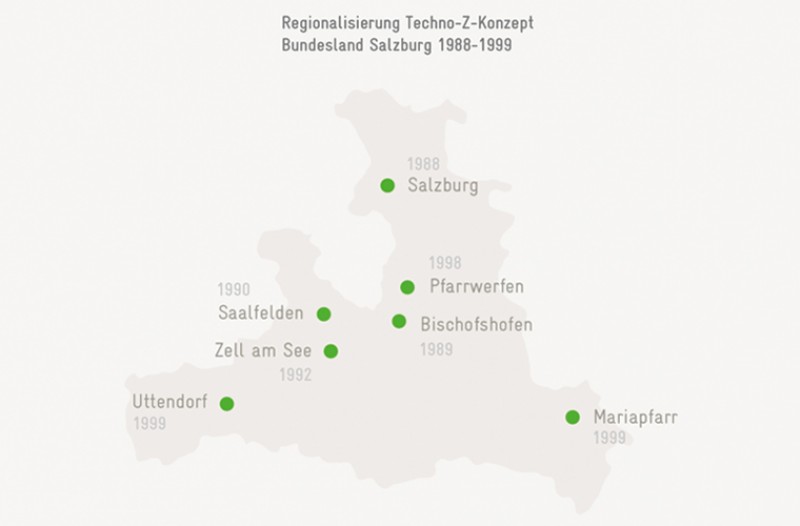 Regionalisation: in the southern part of the country six further technology parks are being built and opened until 1999

The increasing institutional and organizational complexity of Techno-Z Holding requires restructuring. A reorganization phase is initiated in 1999. The goal is a sustainable, private sector enterprise. The first steps involve the outsourcing of research and development to Land Salzburg (today: Salzburg Research) and the sale of shares in the Fachhochschule to the Salzburg Chamber of Commerce.

Techno-Z Verbund GmbH focuses on the private sector management of all Techno-Z locations. At the beginning of 2002, Raiffeisenverband Salzburg takes over all ownership shares from existing shareholders Salzburger Sparkasse and Landes Hypothekenbank and Volksbank, and becomes the sole owner.

This also results in a personnel change in the management: Mag. Werner Pfeiffenberger transfers from Raiffeisenverband Salzburg to join the management of Techno-Z Verbund GmbH.

The technology consulting from the original Techno-Z Verbund is taken over by Innovations und Technologietransfer GmbH (ITG), in which Techno-Z Verbund GmbH participates in 2003. Out of this cooperation, a technical training center (TAZ) emerges at the Bischofshofen site, an HTL College in Pongau, as well as the relocated bfi Salzburg (Berufsförderungsinstitut der AK) in place of the university of applied science that moves to Poch-Urstein. Another measure to support start-ups is the participation in BCCS (Business Creation Center Salzburg) in 2005.

On the basis of the modern facility management approach, Techno-Z Verbund GmbH focuses on the provision of optimal business structures for technology-oriented and innovative small and medium sized enterprises. In addition to the modern infrastructure and target group-oriented location marketing, this also includes management of a company restaurant (2005) and the setup of a full-day childcare facility (2009), along with the establishment of the Coworking space (2012) and the Happylab (2014) in Techno-Z Salzburg.

A central component of the innovation strategy of Salzburg is the further development of the technology and innovation hub Techno-Z into the Science City Itzling. The partners, eg University of Salzburg, City of Salzburg, State of Salzburg and Techno-Z are jointly promoting the expansion of the location. In 2017, the construction of a new laboratory building for the University marks the first structural step towards expanding the University location in Itzling. The establishment of the Science and Technology Hub is another milestone. With the SciTecHub, the university bundles science and technology and intensifies activities in the field of knowledge and technology transfer.

In December 2020, Techno-Z Verbund GmbH acquires a building in the Urstein Knowledge Park in the immediate vicinity of the Salzburg University of Applied Sciences. A completely new workplace concept for Salzburg is being created on around 8,000 square meters in Techno-Z Urstein, in the south of the city of Salzburg. In addition to classic rental, “Proworking” is being implemented there for the first time, a further development of the previous Techno-Z concept. The opening is planned for 2022. 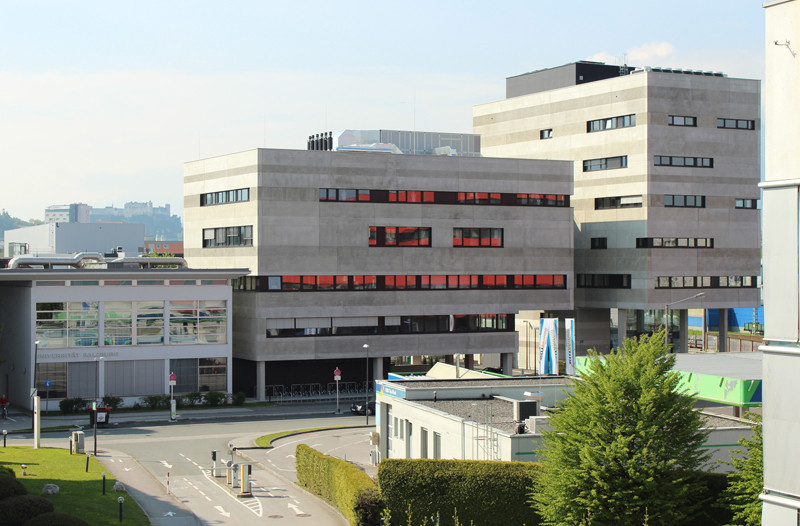 The new laboratory building of the University of Salzburg - Opened in 2017. 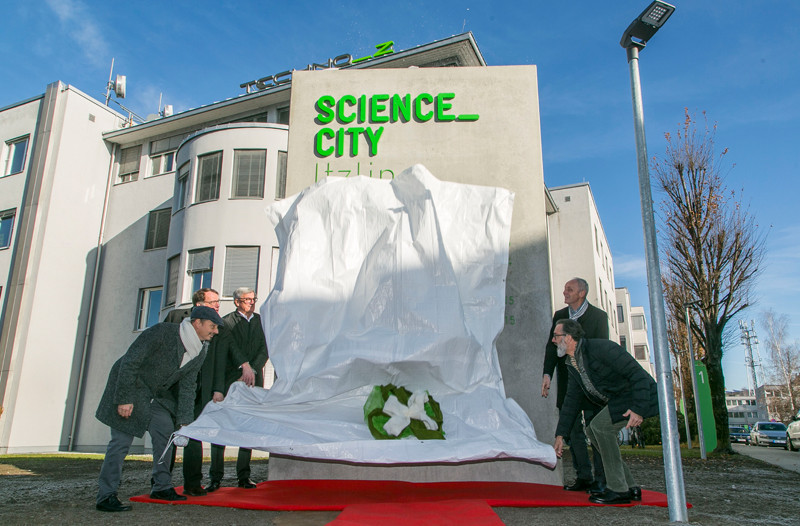 In 2019 a pylon - part of the new guidance system - is ceremoniously unveiled as a visible milestone within the Science City Itzling. (c) WildBild 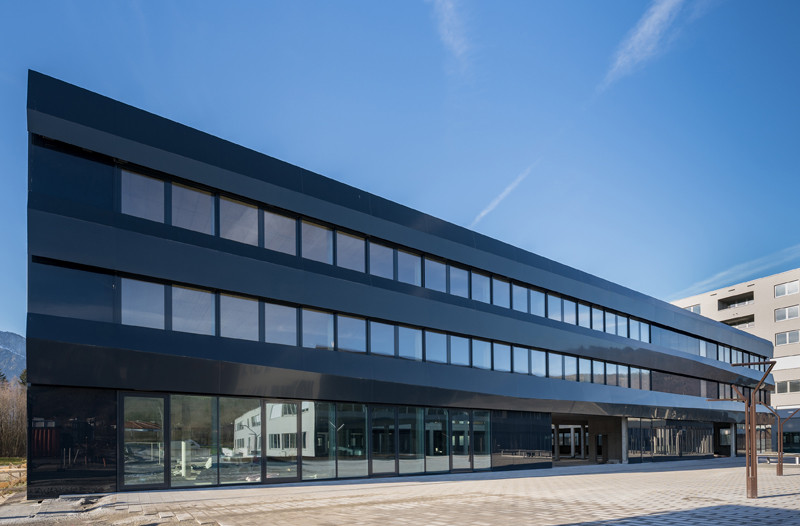